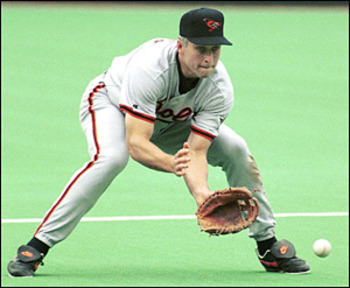 With the beginning of the baseball playoffs, I figured it was time to bring back the All That is Man series. Baseball obviously isnâ€™t the manliest sport (volleyball is), but that doesnâ€™t mean manly men donâ€™t play it. Cal Ripken Jr. played in 2632 straight games and revolutionized the shortstop position from scrawny guys that canâ€™t hit to what it is today. Cal is All That is Man for these four reasons:

Competitiveness
Men are competitive. So is Ripken. â€œOn the night before the start of the season in which he would break one of the most prestigious records in baseball history, Ripken played two-on-two wearing loafers, because there was a hoop and there were players. Did his team win? ‘We crushed,’ he said.”

â€œDuring all the coverage of the streak, someone in the family circulated the story that I cheated my own grandmother at canasta. I donâ€™t remember that, but I might have occasionally drawn too many cards on her, because I did cheat on everyone else. For years I kept detailed statistics on all these family [card] games, for the sole purpose of trying to prove that I was the best. The only positive note here is that I finally figured out that the only proof of how good you are is if you play within the rules.â€ – Cal

“Ripken is nothing if not consistent, even in his approach to something as simple as a home trampoline. Family lore has it that Cal wouldn’t get on the trampoline until he had watched his wife perform on it a few times. Then he started practicing by himself. The first time he tried it in front of anyone, he pretended he had never been on it. ‘Right,’ said Kelly with a smile. ‘He’d probably had 25 hours of practice.'”

Toughness
If you play every game for 16+ years you have to be pretty tough – everyone gets injured, but he just played through it. He once rolled his ankle during a game. It swelled up, black and blue but he finished the game. Afterwards he went to the hospital – the doctor told him to stay off it for two weeks. Whatâ€™d Cal do? He threw the crutches away as soon as he got to the car and played in the next game!

â€œThe Orioles used to play a game to determine which player could take the most pain, and which one was the hardest to bruise, a game invented by Ripken, who, of course, was also the champion. â€˜Ten minutes before the start of a game,’ former Oriole pitcher Ben McDonald once said, ‘a couple of our guys jumped Rip and dug their knuckles in his ribs. We had him pinned down. He was yelling, â€˜No! No!â€™ but he wouldnâ€™t give up. He would rather die that give up. The next day, I had a huge bruise on my ribs, and he had a tiny red spot.â€™”

Maybe he got the toughness from his father: “When I was a kid, he would come home from playing soccer,” Cal Jr. said. “He played midfield when he was in his 50s. He would have these huge blood blisters under his big toe. He’d take out a power drill, drill into the toe, the blood would come spurting out, and he’d go ‘Ooooooooh.'”

All Around Good Guy-ness
Baseball players and government usually mean testifying before Congress about allegations of steroid use. Not Cal. Condy Rice named him the Special Sports Envoy for the US State Department and sent him on a good will mission to China in 2007.

Some schmucks like Barry Bonds refuse to sign autographs for the very fans that pay their absurd salary (including children) – it will decrease the value of their autograph for which they can charge even more money after they retire. No one signed more autographs than Cal Ripken Jr. after ball games.
“Some nights I’ll leave the park and hear a guy say, ‘I got Cal’s autograph eight times.’ And his friend will say, ‘I got it 10 times.’ Cal is the most conscientious player in baseball.”

“My three kids know that when they go to Rip’s house, they’re going there for one reasonâ€”to play with Rip,” said Bancells. “Kids love him. But no matter how much fun they had, he had more. The adults were all sitting on the side eating crabs and drinking beer, and there’s Rip in the middle of the pool with eight kids hanging on him.”

Baseball Smartness
Ripken had an incredible baseball memory – he remembered every situation to the exact pitch. Before the pitch he would evaluate: how does this hitter react on this count, what does he do against this pitcher, what is the pitcher throwing, and more to figure out where he was likely to hit the ball. Other players were quicker, but Calâ€™s brain extended his fielding range.

Here is something baseball fans will have a hard time believing: in certain pressure situations Cal called the pitches from shortstop. He knew every hitter better than anyone else and the pitcher and catcher came to trust his judgements. Ripken would actually signal the catcher, who would then signal the pitcher what to throw!

Another thing I think is interesting about Calâ€™s baseball career is that was always tweaking his batting stance. Coaches preach muscle memory – find what works and stick with it. But Cal seemed to have a different, and sometime extremely different, batting stance every week. Whatever it took to beat the pitcher.